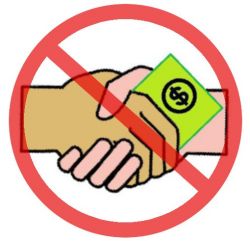 As you read in the series “How Wealth Corrupts Democracy”, numerous methods exist for wealth to totally subvert democracy.

But, if you look into its fundamentals, the very concept of massive wealth in itself is something that needs to perpetuate itself – without amassing more and maximizing itself, such wealth couldn’t exist in the first place. Therefore it cannot risk any kind of threat to that activity, else it may cease to exist.

Despite a total and conscious indoctrination and freedom-limitation process is practiced by wealth, an illusion of ‘freedom’ is ironically perpetuated through the private media owned by the same sources that are privately censoring entire ideological life in capitalist democracies.

The problem comes from the concept of ownership.

Wealth is not ‘money’, as you may have thought. There isn’t, and there will not be as much liquidity (money) to be able to account for the total wealth on earth. Wealth, resides in shares of corporations and their value. But aside than the value itself, owning the shares of the corporations which own all the world means control – for majority few shareholders of the shares have the right to dictate corporate policy.

Do you know of any corporation which is run democratically through popular voting among its workers instead of the desires of majority shareholders ? Any given corporation, any privately owned institution is basically a private tyranny, in that regard – the owner is free to do with whatever s/he wants, being only limited by law. Which is the reason why private interests continually talk against regulations and laws, and want to dismantle them. Like the case of oil corporations, Koch Brothers, coal industry. Or like Comcast and the attack against Network Neutrality.

More than the private corporations attacking democracy, the ownership constitutes an impediment to democracy in itself – as can be seen from the case of privately owned media, journalism, publication, research and education institutions. It is utterly contradictory to expect private owners of institutions to act against their own interests through what they own. And not surprisingly, despite the picture which is vaguely painted to us by the media, that just doesn’t happen.

So then our problem is wealth. How can this be fixed ?

If, it was not possible to privately own institutions and services which can corrupt and subvert democracy, this could be mitigated to great extent. Journalism, Media, Education, Telecommunication are the major targets in this case. Compare Privately owned mass media to almost ‘publicly’ owned internet. Whereas there is uniform and typecast news and information on one side with no input from the actual public, there’s full spectrum of ideas, thoughts and discussion on the other – created by very public itself.

These are strategic aspects of life. Which determine the nature of the society. They should not be controlled by anyone than the public itself, for otherwise those who control them will naturally push their agendas into whole society.

This would fix a lot of things, including the donations & elections issue, since it will make it possible for public to learn what is actually going on, who is doing what, whose interests lie where. However, in itself, a massive mega corporation which is privately owned is always a threat to democracy, for wealth would eventually find a way to corrupt democracy for its own benefit. It cannot be expected that the owners of a massive mega corporation which is bigger than 150 states will not use that massive power to push their own agendas.

It’s something bigger than 150 countries of the world, and there are dozens of them – leave aside the thousands which are as big as small countries.

Which is quite curious in a way – we don’t let a dictator to run a democratic country, but we let total private tyranny for a mega corporation which commands resources and manpower which can be bigger than 150 countries in the world.

When seen in this light, ownership and total private tyranny of such a big segment of economy and society by private owners, glares as the foremost subversion of Democracy

Democratizing the economy by preventing control of wealth in the hands of a privileged minority.

How Wealth Corrupts Democracy – Solution by Via Populi is licensed under a Creative Commons Attribution-ShareAlike 4.0 International License.