Surprisingly, Venezuela Elections are more legitimate than US elections

Again we have Venezuela elections, again we have another case of US state and corporate media already trying to smear elections in Venezuela with hatchet jobs claiming many things ranging from fraud to being anti democratic, just because it may have ended up with a result US didn’t like

However in the real world, one simple comparison of Venezuelan and US election systems leave no room for doubt which country is the one with democratic elections, and which isn’t. Lets have a go at it:

Venezuela: Voter turnout in Venezuelan Elections are around 80%. (source)

US: Voter Turnout in last US congressional elections was only 36.4% – the lowest in 72 years. (source)

Venezuela: Venezuela Elections are governed by an independent Electoral Council.(source)

US: US elections are run by each state, by the party which runs the government at that point.

Venezuela:Venezuelan Voting machines are activated by finger print, you can only vote for yourself and a paper proof of your vote is given to you. You get your finger pointed, preventing you from showing up in another polling station and voting just again, as if the fingerprint verification was not enough. 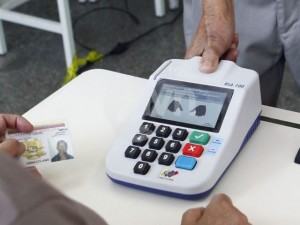 US: In US elections few states mandate paper proof, and voting machines cannot be audited. You don’t even need an ID to vote. You can be anyone and vote anywhere.

Venezuela:Venezuelan voting machines encrypt the vote and send it directly to the Electoral Council by its own network, with no other computer being able to access the local voting computers and only authorized/recognized voting machines being able to send data. All machines have power backups to prevent downtime if power failure happens.

US:In US, it was repeatedly proven that voting machines were easily hackable. (source) (source2) The company which is the main supplier of voting machines is indicted for “worldwide pattern of criminal conduct” by US Federal Prosecutors.(source)

US: In US, there is no way to track and verify the votes from either the local machines, or the central results in central election computers.

There is even more. The below infographic illustrates the full disparage perfectly:

Venezuela vs US election systems compared

Before the elections, private polling agencies in Venezuela and US polling agencies have been claiming that opposition would win, various US corporate outlets had already claimed that opposition would win, a former US backed south american country president, who was present as an election monitor in Venezuela, has claimed an opposition win despite the ballots weren’t even closed at the cost of being kicked from monitoring board as per rules that forbid any statements regarding results before polls closed and electoral commission released results. Even Hillary Clinton released a statement about fraud and illegitimacy of Venezuelan elections. (source)

All this in-advance string of statements and claims did more to give an image of preparation by US and US backed opposition to claim fraud in advance of elections which they seemed to know they were going to lose, than any legitimate argument. All that effort in advance, to claim fraud…

“As a matter of fact, of the 92 elections that we’ve monitored, I would say that the election process in Venezuela is the best in the world.”

That’s what Jimmy Carter, ex US president, who monitored 90 elections worldwide including US elections through his non profit Carter Center, says. (source) Venezuelan elections are the most monitored elections in human history as well.

But, facts stand in the way of corporate propaganda. The western media prefers to do this to us instead:

After sending in the article, a few hours later CNN asked me for sources on poverty reduction under Chavez, and cites for the polls. I easily obliged with their request and provided credible, accessible citations.

They sent me back an edited version, this time with an added sentence after Carter’s statement on the Venezuelan electoral process, stating that the Carter Center had abandoned Venezuela in 2015 and was no longer observing their elections. The statement seemed to disqualify Carter’s 2012 applause of Venezuela’s elections, basically implying that while Carter may have said that then, now was a different story and the Carter Center wanted nothing to do with it. I told CNN there was no way I would include a statement discrediting Carter’s 2012 affirmation of the Venezuelan electoral process as the best in the world. If they wanted context, I could write that the Carter Center no longer operates in Venezuela because the system there is flawless and no longer needs external observation. I didn’t hear back from them for over 24 hours.

So, this was the way in which Venezuelan elections were conducted every time in the past decade, all of which US claimed fraud against. Now that one election (parliamentary) ended up with a non-majority US backed opposition victory, see how US will consider the elections legitimate. But, if this election results are recognized legitimate, then by the virtue of electoral system being the same in all other elections, all of them would end up being valid.

If there is any consistency in US talking points, US has to reject this election result by calling it fraud, just like it rejected the earlier elections – if it recognizes these results as democratic, then it bluntly demonstrates that US likes elections only when their results are favorable to US.

Surprisingly, Venezuela Elections are more legitimate than US elections by Via Populi is licensed under a Creative Commons Attribution-ShareAlike 4.0 International License.

Originally published at https://ozgurzeren.com/surprisingly-venezuela-elections-are-more-legitimate-than-us-elections and republished here under CC license.