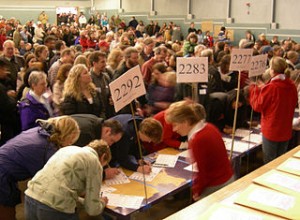 One of the most direct ways in which wealth corrupts democracy is Campaign Donations. You need heaps of funds to run election campaigns. The foremost reason for this is advertisements – it costs money to show your ads on private newspapers, news stations and other media, to reach people with your message. It costs money to go around the country, participating in election rallies. Hell, it even requires money to organize election rallies.

Donations can come through either individual wealth holders themselves directly, or through the institutions they own – like corporations, NGOs, private institutions. Donations can also take the form of financing various activities of the politician or his/her election campaign – like arranging and financing an election rally, or an advertisement campaign, or travel expenses. Donations don’t stop with election too – you can still donate to a party after a candidate is elected. Which also serves to strengthen a candidate’s position in the party, since s/he is the one bringing the donations.

Limits can be put for donations to a political candidate in campaigns. This is the method which is generally used to ‘democratize’ elections in regard to campaign donations. The idea is, no single donor can donate over a certain amount. Which makes sure that a rich interest backing a candidate cannot donate a whopping amount and invalidate all opposition through that donation. This works only to a certain extent, for there are other ways of enabling/disabling a candidate or politician. However despite other ways exist, even the donation limits have been dismantled in a recent supreme court case in USA. Which means that from this point on, private interests and private organizations can donate any amount to their preferred candidate. This was probably pushed by private interests in reaction to the fundraising success Barack Obama campaign did in 2008 elections – they gathered small donations from hundreds of thousands of ordinary citizens, therefore surpassing the private funds that was being put into election. Lets see what happened in 2008 :

Barack Obama was able to reach people through internet, rally them, get small donations from hundreds of thousands of people and also organize them. Obama campaign was also able to rely on the volunteer effort of many volunteers, making campaigning much less costlier for them. Obama campaign raised $745 million in funds, and spent $730 million of that amount. Majority of these donations came in amounts of $200 or less, from many citizens around USA through internet.

This was an exception to the rule, which was only possible because of the existence of internet. Internet is a medium which allows everyone equal standing, neutralizing the huge impact wealth difference has. Traditional media like Television, Newspapers, other publishing is privately owned, therefore they can decide to exclude/censor a certain candidate they do not like – leave aside that it requires huge funds even from the start to utilize these means. Which is in itself another factor how wealth corrupts democracy, as we will examine later. However Internet solves this through a principle called Network Neutrality, which mandates that any kind of internet traffic has to be treated equally. Which is exactly why it is currently under attack.

Proceed on to the next part of “How Wealth Corrupts Democracy” : Media & News

How Wealth Corrupts Democracy – Campaign Donations by Via Populi is licensed under a Creative Commons Attribution-ShareAlike 4.0 International License.