How media demonizes Vladimir Putin – or any other character – Excellent example 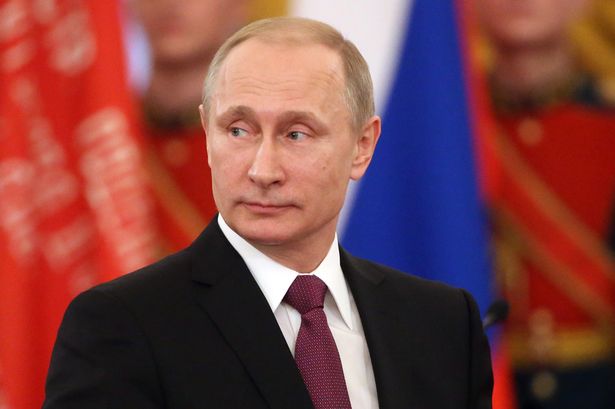 Photo: Vladimir Putin being threatening by looking towards his right hand side

Just take a second to observe the incredible array of headlines below:

These are headlines which were made by western press, after a statement Vladimir Putin, president of Russia made in an interview two days ago.

By seeing the headlines, and even reading a bit of these, any reasonable person would be quite convinced that this person had had threatened to use nuclear weapons – against ragtag terrorists dispersed around a populated country, no less.

Some of these are tabloid publications with quite a strong following, and some of them are more respected publications. International Business Times seems to be quite insistent, to boot – to the point of putting out 3 different articles with similar headlines over the course of two days. Overall, even the examples here constitute quite a formidable host of publications with quite large amount of readers. Who are being served a narrative which basically tells them Vladimir Putin has threatened to use nuclear weapons, no less.

Lets check what he actually said:

“We must analyze everything happening on the battlefield, how the weapons operate. The Kalibrs (sea based cruise missiles) and KH-101 (airborne cruise missile) have proved to be modern and highly effective, and now we know it for sure – precision weapons that can be equipped with both conventional and special warheads, which are nuclear,” Putin said.

“Naturally, this is not necessary when fighting terrorists and, I hope, will never be needed,” the president added.

Does that look anything like ‘threatening to use nuclear weapons’?!?

But, a vast number of people who have read the earlier narrative from the corporate media still do think that President of Russia has threatened to use nuclear weapons. Moreover, they are probably propagating that narrative in bars, pubs, even at work.

As a result, a public opinion that is sold by corporate media, which advertises that President of Russia is a ‘dangerous dictator’, is being strengthened. Which makes it much easier to sell the ‘imminent threat’ narrative, which then easily justifies ‘We need increased military budget’, and eventually ‘We must put boots on the ground’ finale. Practically the reason why media demonizes Vladimir Putin…

What they are doing, is no different from the methodology they employed to demonize practically any other character that they made headlines in the past two decades. Its a tested and proven methodology.

But, we should be thankful – at least they are not manufacturing fake atrocity stories like they did before.

How media demonizes Vladimir Putin – or any other character – Excellent example by Via Populi is licensed under a Creative Commons Attribution-ShareAlike 4.0 International License.