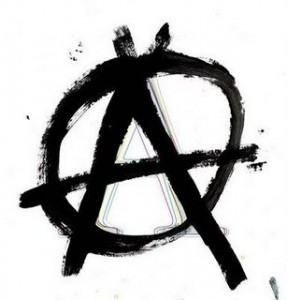 Chances are 99% that you think Anarchism is ‘chaos’.

Anarchism is NOT chaos.

Anarchism is an ideology in which no one is allowed to lord over another – for any reason, in whatever form. It refuses any kind of authority of anyone over anyone else but himself/herself. The only authority allowed is the authority of your own conscience over you.

The very definition is hidden in the name actually – AN-ARCHY : “AN”, being ‘without’ and “ARCHY”, from “arch”, meaning ‘over you’. So it basically means ‘no one over you’.

It says that people should live as they want, decide based on their own conscience and preferences and beliefs, and join & leave communities as they see fit. It’s the ideology of ultimate freedom.

It says that any kind of organization should be participatory, collective and non-hierarchical. And it opposes the concept of state or any kind of centralized authority in any form.

Complex projects can be done through collaboration of many people, like how they were done in very early ages of humanity. And anyone can benefit from any resource on planet earth as they see fit – totally free and independent.

Organizations need to be SELF governed, locally, instead of having anything dictated by any kind of external, remote or central authority outside their own.

Except, there is a major problem: As the early communities in human history found out – masses of less organized people are easily subdued by smaller groups of organized, armed people seeking to repress and enslave them. The timeline of early agricultural communities defending against small groups of raiding hunter-gatherer/herding tribes is a story of this very concept.

See, here you are, living happily in your own anarchic community of farmers, going about your business every day …. And suddenly, a group of armed thugs come out of nowhere, raiding, killing and pillaging. You don’t even have the time to tell other communities around you that raiders are coming, leave aside react in a collective manner against the raiders. Raiders come, raid, pillage and – hopefully – go.

If they don’t go, they conquer you, and become your lords through martial might.

If they go, you can’t just wait for the next raid to happen, and suffer and die without any remorse.

But here, you just ended up creating an organization, a potential hierarchy, and a group of armed men in your midst.

That’s the major problem with anarchism. Its not possible to counter against better armed or more organized marauding smaller groups seeking to do bad things to you. So, it needs a means of protection to be found, until it can be implemented at large.

Another problem is morals and ethics. See, a community somewhere else may choose to practice slavery. And in terms of anarchism, you cannot go and repress those people and force your morals on them. You can only choose to outcast them through collective action, and this requires collective action by every community.

Of course, if everyone properly observes the ideology of Anarchism, they wouldn’t be practicing slavery in the first place.

But what if some decide they just don’t want to follow the ideology ?

That is another problem with Anarchism.

However, in any respect, Anarchism stands as the only ideology which can appeal to both left and the right and even the extreme versions of these groups, due to the freedom it bestows upon the followers.

Anarchists are a greatly varied bunch, and include many notable figures like the MIT Professor Noam Chomsky, who was named the most important intellectual alive by the New York Times and many other sources.

Long story short, Anarchism is a system of self-governance for both individuals and communities with participants having total freedom in their decisions of participating where, when and how.

What is Anarchism by Via Populi is licensed under a Creative Commons Attribution-ShareAlike 4.0 International License.