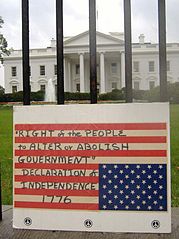 If you’re from USA, chances are quite high that you are wrong on this one.

The current ‘Libertarianism’ concept in USA political mainstream seems to be a form of ‘no government’ and ‘total private freedom’ with no bounds on private property.

Refer back to the situation we pictured earlier – an environment in which there is no state, no standing army, law, police, and instead everyone being free to do whatever they want with their ‘private property’. Who is going to enforce the property rights of someone ? Himself.

Which means that, the owners of Walmart or Halliburton or Exxon have to enforce their own property rights themselves.

But, what is going to stop them from enforcing their ‘rights’ on an area larger than their private property ? You and your small firearm ? Against the tanks, aircraft, and helicopters of military corporations ?

You must collectively come together and organize yourself and have a standing martial power in order to prevent anyone from establishing themselves as an overlord over you. Which is the exact problem with Anarchism. But, at least, Anarchism does not readily allow accruing unbounded private property, which would set up immediate feudal lords even from the start.

But the current logic of ‘Libertarianism’ in mainstream in USA, does.

But in reality, Libertarianism is totally different from what is being trumpeted by some right wing segments in usa.

Libertarianism seeks ultimate freedom of the individual, and therefore in many respects overlaps with Anarchism. So much that both are cross-referenced inside their own long explanations. While some versions of Libertarianism allows private property of individuals outside their own self (external things), it is not inherent in the ultimate definition of the concept. Therefore it is nothing like what is mistakenly construed in USA.

The problems which plague Anarchism also plague Libertarianism. Therefore their problems are similar in general.

In short, Libertarianism is a system which seeks ultimate freedom for the individual, with a lot of its aspects overlapping with Anarchism.

What is Libertarianism by Via Populi is licensed under a Creative Commons Attribution-ShareAlike 4.0 International License.