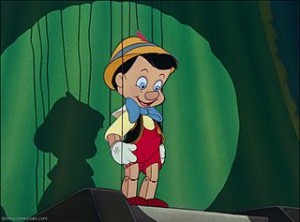 If there was any example to illustrate how media is used to lie and do propaganda for private interests, there couldn’t be any better example than an article from The Guardian that was published just one day before Greek Bailout referendum on 5th June 2015.

And then proceeds to illustrate a picture in which people are running to stores trying to stock up on basic food staples, and medicines in a craze, citing ‘reports’ from unnamed sources which go like:

“…..Queues were reported at every cash machine in Athens….”

“….shortages of food and drugs, the tourist industry facing a wave of cancellations….”

“….Food staples, such as sugar and flour, were also fast running out on Friday …..”

Then moves on to blame the Syriza government for all of these, for imposing capital controls and restricting bank withdrawals.

Nothing they say in the article has any grain of truth.

Guardian’s very own readers in the discussion thread of that very article, are refuting the claims and accusing Guardian of lying, in hundreds of comments.

Josephine Dagley: I’m English. I live in Athens. This is a lie. Supermarkets are well stocked. No panic buying ..stop exaggerating and spreading fear and propaganda !

Shahidah Janjua: I am very surprised at this report in the Guardian. I am in Greece and there is not one word of truth in it. Medicines have been hard to get for a while, but they are not running out. The supermarket shelves are full of staples, and fruit, veg, everything. Please don’t spread nasty damaging rumours

Andronikos Lykoudis: How come I havent noticed a thing….

Chris Strapatsa Glykofridi: Where does your newspaper get their information…. I live in Greece and the supermarkets are well stocked! STOP the propaganda and the lies!!!!

Kallie Alviano: Speaking to relatives in Greece atm, what they are telling us is going on is the opposite to what we are reading. And in terms of tourism bookings being down? Half of Melbourne’s Greek population is on holiday in Greece atm- they are not letting the scaremongering put them off

Vangelis Lentaris: I am a community pharmacist in Greece and there is no problem concerning medicines. Please check your information before you publish it. Do not reproduce the information of the Greek corrupted media.
Thank you.

Christina Sourouni” I’m Greek.This past week,I’ve watched and read the most cruel and shameless Propaganda in my entire life(in Greek & foreign media)!!You all commit a crime against Democracy!!!

And here is a picture of the actual post, just in case Guardian somehow takes their post down. 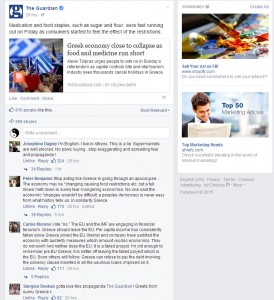 When your own readers refute you, you know you are in trouble

As you can verify from any alternative news source you can find on internet as well, the commenters are right. No such situation in Greece at all.

So basically, this Guardian author – Helena Smith – is outright lying, and The Guardian is publishing and promoting this lie.

This is called a ‘hatchet job’, in journalism.

But… Why are they doing this?

There are two reasons.

First, The Guardian is attempting to affect the perception in Greece and abroad using its reach, in order to make an impact on the referendum. The corporate interests which are backing the creditors’ demands in Greece do not want Greeks to vote No for the bailout terms European Central Bank is trying to force on Greece.

The terms also require various amenities which the corporate interests can use, like curbing of bargaining rights for unions, along with more sociopath measures like cutting social security for elderly retirees.

So, the interests that own Guardian have an agenda they want to force.

Second, notice how the article immediately proceeds to attack Capital Controls which Greek government introduced in order to counter any kind of fiscal crisis due to any potential bank run.

In other occasions, such capital moves can be used to blackmail a country to destabilize its economy and force a government to oblige with demands of foreign interests.

That was what was about to be done to Greece just a few days ago, only to be thwarted by bold move of Greek government.

Thirdly, its intended to scare off people in other countries like Spain, Italy, who are opposed to austerity they are being subjected to for a long while, and turning against the Eu.

Of course, that this kind of scaremongering would probably effect any Anti Eu, Anti Austerity segments in British population to ward off any ‘Brexit’ vote in proposed Eu Referendum in Britain is an added plus.

Another long term desire can be seen as to scare off tourists from Greece, and deteriorate Greece’s economy in the coming year to put the Greek government in a difficult position, with the hopes of making them unpopular – the owners of media conglomerates do not like left wing governments, attack them in every way possible and the people they hire reflect that.

When Greek government defaulted on its debt due to the creditors not budging an inch during negotiations in the past 4 months, a few days ago, European Central Bank did something it has no right to do : Cut liquidity (hot money) to Private Banking System in Greece, by showing Greek Government’s debt as an excuse.

A Central bank in any given economic region has one foremost task before all others – presiding and assisting the running of banking system in the region. This may be a country itself, or a larger economic zone like EU. Whereas Greek Central Bank presides over Greek banking system, Eu Central Bank presides over all the banking systems in all countries of the Europe in an overarching manner. All banks included. The central bank provides liquid cash to private banks in the region, and these banks run their affairs through this money.

This is a basic function of the banking system and central banks.

So the HSBC, RBS, any private bank’s branch in Athens has to use the liquidity from European Central Bank and Greek Central Bank to run their affairs.

What happens when the central banks cut that funding?

So this was what ECB did – by denying liquidity to Private Banks and Central Bank in Greece, who had nothing to do with Greek Government’s debt or the negotiations going on with its creditors, ECB shut down Greek banking system.

This caused a bank run, and in order to prevent a fiscal crash, Greek government had to limit withdrawals and impose capital controls. For which, the hatched job in The Guardian is now accusing Greek government with.

So as you see – European Central Bank basically shut down the banking system in Greece to blackmail and force Greek government, despite ECB has no right or justification to do so.

And The Guardian is following up on that job, by accusing Greek government of causing a crisis in Greece despite it is the European Central Bank which caused it, trying to scare Greek people to not vote No for the bailout terms imposed on them.

There you have it. Private Media lying and subverting democracy

This is not a one-time incident or a mishap. Its a regular procedure.

Same kind of moves were done to Argentina and many other countries and same kind of articles were propagated by the media establishment in the west, showing the economic terrorism which was inflicted upon these countries as the fault of their government – who were not compliant with the demands of the foreign interests.

Here and now, The Guardian is just repeating the procedure, without no cost or repercussion to them – it will continue publishing such articles and the person who wrote that hatchet job full of lies will keep writing as an author, propagating the interests of those who own her newspaper – without any trace of shame or shred of conscience.

Note – Guardian is supposedly the most liberal and bold publication in angloamerican press, with the courage to publish Wikileaks.

If The Guardian is doing what you have just read here, imagine the rest.

This is a glaring example of how you can never trust the mainstream media in the West.

An Excellent Example of Mainstream Media being used for Propaganda through Lies – The Guardian Lying about Greece by Via Populi is licensed under a Creative Commons Attribution-ShareAlike 4.0 International License.