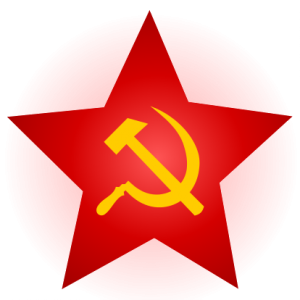 A lot of people in the west know Communism as ‘opposite of democracy’, which is flat out, bluntly wrong.

Communism is common ownership of the means of production – rivers, seas, factories, farms and so on. Anything that is critical to the survival of mankind as a whole and the survival of the individual, must be commonly owned, and democratically governed. This is where the interesting bit comes in too – communism requires democracy both in economy and politics.

So it’s not only not an opposite to democracy, but also one of its requirements is democratic governance of the economy and politics…

The word comes from the root of ‘common’, ‘commune’, ‘communal’. It’s common ownership of things that people’s lives depend on. The funny thing is that this is also codified in in many countries’ laws since middle ages: the concept of ‘commons’ in british medieval law that is the basis of today’s ‘common law’, is exactly that. In medieval law, the things which people’s lives depended on were owned by everyone and considered commons for common usage with equal rights. From forests to fisheries. Of course, that principle was violated in a lot of ways: Commons in medieval era was not governed democratically, and key elements of economy like farmland were owned privately by the few rich lords. However the core of the principle was as explained.

But make no mistake – democratic ownership does not mean that everyone will be owning your house or your car equally and making decisions on how to use them democratically. Or your underwear.

Rather, that kind of things are considered personal property. What is not allowed in communism is private property – as in no single person or a few people can own the river in your state or county, and claim all rights to it, and control what you can or cannot do with it.

So basically communism seeks to run these massive resources – the economy – democratically with everyone’s participation and power. And then distribute the fruits of the effort in between the members of the society as personal property, equally.

Now here is another kicker : Contrary to what you probably thought, and despite the above definition, communism does not mean ‘central government’.

However truth is different – these countries were State Capitalist, with a good measure of Socialism thrown in. Even the official acronym USSR is United Soviet Socialist Republics.

So then USSR was not communist. And Communism is democratic owning and governing of economy. How does this happen then ?

Lets say there is another factory in the next county. The employees in that factory also do the same. So do the people who are living on farmland, the fishermen using the river, and so on. If you don’t like your locale you can just move to another locale and participate in another cooperative. Or work for another factory as an employee while still staying in your own county. Similar to what is in the western economies – but with a major difference : Instead of one rich person owning the factory and dictating all decisions and afterwards taking most of the profits, you – the employees of the factory do all of these democratically.

So, a truly communist economy is an infinitely decentralized, collective and cooperative, democratic groups of people engaging in production. Exactly as what Abraham Lincoln was advocating when he said “Those who work the mills should also own them”.

However this quite participatory, democratic, decentralized nature is also communism’s major disadvantage : It makes dealing with external threats, invasions, occupations, bombings – whatever you name it – very difficult. Imagine an organized, armed attacker – another country – invading your country. You need to mobilize your resources, manpower, and react in an organized fashion. However the decentralized and participatory democratic nature of communism makes this hard both politically and economically.

This is what the early communist communities found out in Russia, immediately after the Russian Revolution in 1917. When 18+ countries under the “Leader of the free world” (then) Great Britain have invaded Russia to repress the people and re-install Tzar and aristocracy, in the name of “democracy”. The damage inflicted on Russia by the invasion and the inefficiency of the system in coping up with the aggression, caused the revolution to go increasingly paranoid, ending up in schizophrenic “security cliques” coming to power and centralizing everything. Which led to the “security state” format USSR took until death of Stalin. And with that change into security state, the decentralized and democratic system of governance in Russia was turned into what can be called a State Capitalist centralized state with a noticeable dosage of Socialism.

But the concept of centralization vs decentralization exists for communism too, as with all kinds of methods and systems. Communism can be more centralized, treating entire country as an unit. Or totally decentralized, with local communities making their own economic and political decisions. However when communism is totally centralized, it becomes almost identical with Socialism.

For purposes of implementation today, communism may have an higher chance since information revolution has created an unbelievable ease in communication and collaboration thanks to technology. Internet and computers enable people to collaborate and decide from continents apart. In a fast and efficient fashion and regardless of wherever they are and whatever they may be doing – mostly without even interrupting their daily schedules.

Examples of these can easily be seen in Open Source software movement, where software developers from all parts and all cultures of the world collaborate online and create massively complex and functional software which are impossible to create for biggest mega-corporations and governments themselves. In fact, most of these corporations and governments use the open source software. Like Linux, which runs almost every other web server on internet, hence almost all the websites you are visiting and using.

There are efforts to carry this decision making and collaboration systems to other aspects of life as well as politics, with crowd-sourced lawmaking and there is even open source manufacturing. And these are maturing at lightning speed.

Long story short, Communism is a decentralized economic and political system that mandates both economy and politics be run democratically, and everyone should have equal rights in things that concern everyone.

What is Communism by Via Populi is licensed under a Creative Commons Attribution-ShareAlike 4.0 International License.