Neoliberalism 101 (aka Reaganism, aka Thatcherism) – How to be a Neoliberal in 5 minutes 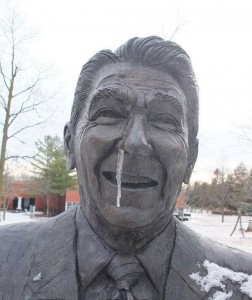 Photo: Massive wealth of the rich trickling down to everyone

Juggle the keywords according to the times – For example, “Drugs” worked so well in 1970s, but doesn’t have much impact today. Interchange keywords which may have contracted a negative meaning with more positive versions. For example “markets” instead of “business”.

If in doubt, go with surefire keywords like “freedom”, “nation”, “security”.

Target right-wing/conservative voters. These people give great importance to some of these issues, and they don’t care if entire country burns down as long as they get something done about these stuff. For example, it doesn’t matter if single accidental mothers and their babies are suffering from poverty – as long as there is ban on abortion, everything is ship-shape.

Now start running a monologue with these keywords.

Talk about how your opponents are ‘destroying’ the “nation” with their “attacks” on “freedom / markets / economy / patriotism” and their lenience about “abortion / drugs / security / immigrants”. Use and change keywords as necessary according to the times. Take care not to talk about “Commies”. You’ll look like an idiot – it’s not 1950s anymore.

NEVER define any of these concepts precisely. If someone challenges you with obvious contradictions in between the “Freedom” you are advocating and the tough “security” measures you are demanding, totally ignore that and rewind back to how his “lenience” about the “security” of the “nation” is endangering “freedom”.

Rinse and repeat as many times as necessary, at the risk of appearing like a witless idiot.

Shoot out vague promises like a machine gun – Promise “jobs” with a “great economy”, promise total “security” for the nation with a great commitment to “freedom”.

NEVER promise anything solid or verifiable. Anything you promise should be totally vague. If you are cornered with the question “How are you going to accomplish these”, give a monologue about “reforms”. Be totally vague about those “reforms”.

These will get you the votes. Now you will need backers and donations.

Start calling for tax breaks for corporations and the rich, and deregulation. Your answer to ALL questions about economy, jobs, poverty, crisis should be these two: Tax breaks and deregulation. Repeat over and over how these will fix everything. Ignore any criticism based on statistics, actual reality and history.

This will get you massive donations from corporations and the rich. Use these donations to reach even more voters with the above messages. Rinse and repeat as if there is no tomorrow.

Got elected to office? Well done – this is where the fun starts.

Now start defunding and crippling any public service. Then talk about how these services do not work, how government is incapable of doing anything. Push for privatization of everything. Talk about “markets” and how they do everything “better”. Never respond when asked about Enron disaster, or British Railways privatization and how these have been disastrous for everyone but the shareholders.

Arrange massive tax breaks for mega corporations and the extremely rich. At the same time, ramp up defense spending and hand out defense contracts like free beer. Cite “security” threats. If possible, push an overseas war, a ‘war on drugs’ or any kind of ‘military action’ against an undefinable, elusive enemy. This will allow military to use its resources like missiles, shells, fuel like there is no tomorrow, which will need to be replaced from corporations that back you.

There will be huge budget deficit due to tax breaks and military spending. Use this to push for more cuts to public services and privatizing anything possible. Blame everything on government and the people who use these services – even if those people are the majority. Accusations of “laziness”, “freeloading”, “entitlement” can work well. Tell that everything will be magically different if everything is privatized.

If there is nothing else left and you are feeling bold, push for cutting retirement pay of the elderly or total privatization of retirement funds. If the political climate is anything suitable, push for total destruction or privatization of social security system. Use the money coming from these for more tax breaks for corporations and the rich and military spending.

If people are suffering badly and there are protests and reaction, start removing freedoms and liberties through legislation for “security”. Equate the reaction and opposition in your country with the vague foreign enemy you are fighting against. If possible, militarize the police. Use that to give even more contracts to military contractors.

Meanwhile keep repeating the keywords and talking points you used to get votes just like before. If faced with massive popular reaction against your policies, talk even louder about the issues and keywords. Accuse everyone.

Do NOT do anything solid for the vague promises you have given. Actually, if you can, bump up immigration so labor costs can go down and corporations can profit even more. Illegal immigration will especially help businesses to employ illegal immigrants and dodge social security and tax obligations. Keep talking about how immigration is destroying the country while doing this.

If you end up losing office as a result of these, don’t worry: the tax breaks you have given, public services you sold out and budget you destroyed will make their full effect well into the new administration’s term. When it happens, use that to call for even more tax breaks, privatization and cuts to public services.

If you don’t lose office, still do the same.

Rinse and repeat over and over. Do not change any policy even if 80% of the population ends up poor and suffering. (source) (source2) Push foreign wars at the risk of World War 3. (source)

Take a moment off the routine and check: 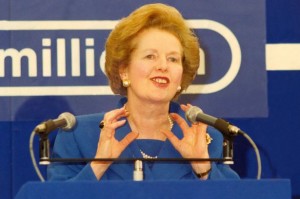 Margaret Thatcher approves the level you attained in Psychopathy

Congratulations! You have passed Neoliberalism 101.

You are now an unmitigated heartless psychopath who can send Reagan and Thatcher crying back to their mamas.

Neoliberalism 101 (aka Reaganism, aka Thatcherism) – How to be a Neoliberal in 5 minutes by Via Populi is licensed under a Creative Commons Attribution-ShareAlike 4.0 International License.